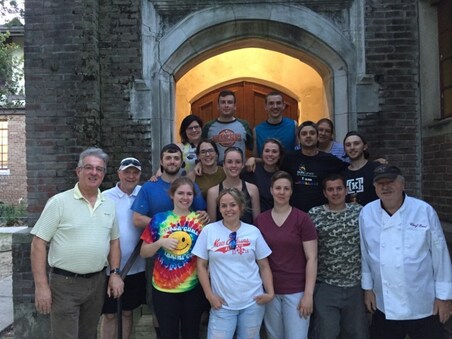 The Together By Design team standing with members of the Church of the Annunciation in New Orleans after restoring the church altar.
Together by Design
Engineer and Memorial University professor Darlene Spracklin-Reid has been taking students to New Orleans since 2009 to help rebuild after Hurricane Katrina. Spracklin-Reid co-founded the Together by Design project with John Oates, from the College of the North Atlantic. Their aim was to encourage volunteerism in Newfoundland and Labrador, as well as help the people New Orleans. The program started with the College of the North Atlantic and expanded to include Memorial University students. In 2016, Volunteers spent more than two weeks working on housing projects. This trip included a mix of carpentry and engineering students, working on one housing project in the city's Lower Ninth Ward — one of the neighborhoods hardest hit by the hurricane — and another on New Orleans east side. Spracklin-Reid said the trip not only helped the people of New Orleans, but let the student volunteers take their academic study out of the classroom.

John Oates said,​"CNA students have not only received a practical education with the help of the Fry Family Foundation, they have also learned the value of philanthropy themselves, by participating in projects funded by the foundation. They are concentrating on rebuilding around an Educational Corridor. Their philosophy is that if you rebuild schools, libraries, community centres, etc., the things that families and communities need to thrive, residents will return. We have worked with these groups since 2007 because their approach to redevelopment and the goals of the community are closely aligned with the values of CNA and the Fry Family Foundation."

Geomatics students surveyed a number of areas that have been identified as green space and beautification areas in the neighbourhood. An abandoned convent that the neighbourhood intends to renovate and use as a residence for volunteers was also studied for further development. Oates said, "The carpentry students secured and completed minor repairs on a number of vacant houses in the area. This work is necessary to keep houses from being torn down by the city and allows the neighbourhood to now redevelop the properties as low-income, affordable housing for the residents."

​Watch a video about this project: "Together by Design: A decade of students helping to rebuild New Orleans".