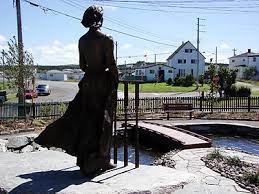 Mariners Memorial, Grand Bank
In 2005,  the Grand Bank Heritage Society was planning to erect a world-class provincial memorial to honour thousands of lost mariners and also pay tribute to the women who had to endure the loss of their men. Fry Family Foundation made a commitment of $15,000 to the Grand Bank Mariner’s Memorial to be paid over a period of three years with the first payment being made in March 2005.

Unveiled in 2007, the Mariners' Memorial is the only provincial memorial dedicated to the memory of those who lost their lives at sea and also pays tribute to the strength of those who were left behind. The life-size bronze female figure is set in the garden, defined by trees, landforms and rock terraces. The statue is meant to symbolize the virtues and strength of character of thousands of Newfoundland and Labrador women who have lost the men of their families to the sea. The garden also has a symbolic shoreline of beach rocks defining a water channel, with plaques containing the names of mariners lost at sea. Read more about the Mariners Memorial.

Fry Family Foundation co-founder Marlene Fry has deep roots in Grand Bank. Her grandfather, Abraham Dolimount was a cook on the Grand Bank schooner Mable Dorothy for many years. Abraham's wife Charlotte  raised 11 children in very difficult times while her husband was at sea. We are very pleased to have played a part in this very worthwhile project.