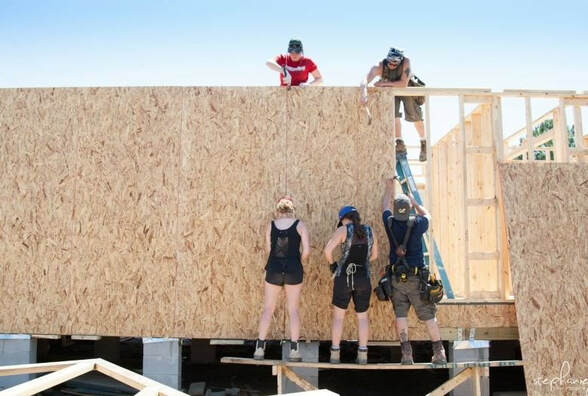 Together By Design
​When disaster strikes, Darlene Spracklin-Reid brings together a community to rebuild, all while giving students hands-on learning experience and inspiring the next generation of volunteers. Ms. Spracklin-Reid, is the co-founder and director of Together by Design (TBD), a not-for-profit that brings together engineering students and apprentices to work on community service projects. Ms. Spracklin-Reid co-founded the TBD project with John Oates, from the College of the North Atlantic. Their aim was to encourage volunteerism in Newfoundland and Labrador, as well as help the people New Orleans. Starting in 2009, she has led a team of volunteers to New Orleans  to help rebuild after Hurricane Katrina. The team also works on projects in Newfoundland and Labrador, improving teaching and learning facilities as well as accessible housing.

Ms. Spracklin-Reid says, "I'm an engineer and a volunteer. I also have a professional background in construction management. I thought it was important to install in students an awareness of how they can use their skills to give back to their communities. I feel it helps them further develop their skills and make them better professionals.  I also feel it is incumbent on engineers to be leaders in community service. After all, our mandate is to make the world a better place. Having come from a construction background, I know that respect for the trades and the skills of tradespeople is essential. As a result, TBD was founded to bring students studying the trades and engineering together in community service. I became interested in New Orleans in particular from watching the aftermath of Hurricane Katrina on television. As each day passed, I couldn't believe how the situation for the people of New Orleans was worsened instead of improving. I was deeply impacted because it was truly an engineering failure. The city survived the hurricane, but it was the failure of the under-designed levees that caused so much death and destruction. As a professional engineer, I felt I owed something to the city, although I'd never been there. I felt drawn to use my engineering skills to try to help ameliorate the damage."

Watch a video about this project: "Together by Design: A decade of students helping to rebuild New Orleans".