Together By Design
Many years ago, Darryl and Marlene Fry lived in New Orleans for 4 years with their young family. When Hurricane Katrina hit New Orleans, they knew they wanted their Foundation to help a place that they loved. College of the North Atlantic (CNA) was already a partner with the Foundation, and Vice President Corinne Dunne suggested that FFF could help with a program for instructors to take students to New Orleans and help with rebuild. Darlene Spracklin-Reid and John Oates, two engaging instructors, headed up the New Orleans rebuild program while at CNA. After they left CNA for  Memorial University (MUN) engineering and Skills Canada NL, they got support from their new employers, FFF and others and  co-founded the not-for-profit 'Together by Design (TBD)'.

The program that started with CNA and expanded to include MUN students, brings together engineering students and apprentices to work on community service projects. Their aim was to encourage volunteerism in the province, as well as help the people New Orleans. Starting in 2009, they led a team of volunteers to New Orleans  to help rebuild. The team has also worked on projects in NL, improving teaching and learning facilities as well as accessible housing.

Ms. Spracklin-Reid said, "I'm an engineer and a volunteer. I also have a professional background in construction management. I thought it was important to install in students an awareness of how they can use their skills to give back to their communities. I feel it helps them further develop their skills and make them better professionals. I also feel it is incumbent on engineers to be leaders in community service. After all, our mandate is to make the world a better place. Having come from a construction background, I know that respect for the trades and the skills of tradespeople is essential. As a result, TBD was founded to bring students studying the trades and engineering together in community service. I became interested in New Orleans in particular from watching the aftermath of Hurricane Katrina on television. As each day passed, I couldn't believe how the situation for the people of New Orleans was worsened instead of improving. I was deeply impacted because it was truly an engineering failure. The city survived the hurricane, but it was the failure of the under-designed levees that caused so much death and destruction. As a professional engineer, I felt I owed something to the city, although I'd never been there. I felt drawn to use my engineering skills to try to help ameliorate the damage."

John Oates said,​"CNA students have not only received a practical education with the help of the Fry Family Foundation, they have also learned the value of philanthropy themselves, by participating in projects funded by the Foundation. They are concentrating on rebuilding around an Educational Corridor. Their philosophy is that if you rebuild schools, libraries, community centres, etc., the things that families and communities need to thrive, residents will return. We have worked with these groups because their approach to redevelopment and the goals of the community are closely aligned with the values of CNA and the Fry Family Foundation." Geomatics students surveyed a number of areas that had been identified as green space and beautification areas in the neighbourhood. An abandoned convent that the neighbourhood intends to renovate and use as a residence for volunteers was also studied for further development. Oates said, "The carpentry students secured and completed minor repairs on a number of vacant houses in the area. This work is necessary to keep houses from being torn down by the city and allows the neighbourhood to now redevelop the properties as low-income, affordable housing for the residents." 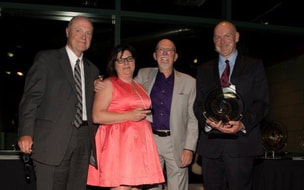 In 2017, Fry Family Foundation celebrated John Oates and Darlene Spracklin-Reid of TBD as one of the 'Best of the Best',  the Elite that we have partnered with during the first 20 years on the Foundation. At the time Darryl Fry said, "You will not find two more high-tech instructors with the empathy they have for their students and the world in general... the students they teach and mentor are very fortunate."

​Watch the video: "Together by Design: A decade of students helping to rebuild New Orleans".